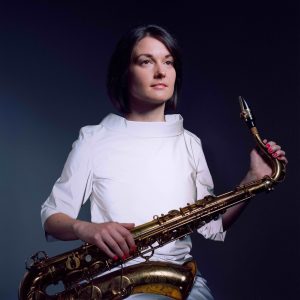 Saxophonist and composer Trish Clowes has been described as “an improviser to be reckoned with” (Downbeat Magazine) and “one of the most agile and original jugglers of improv and adventurous composition to have appeared in the UK in recent times” (John Fordham, the Guardian). A BASCA British Composer Award winner and former BBC Radio 3 New Generation Artist, Clowes has received critical acclaim for all six of her album releases.

Clowes’s band MY IRIS – with Chris Montague, Ross Stanley and James Maddren – has toured worldwide and been hailed as “the jazz of the future” (Augsburger Allgemeine). Her performances (either with her band or as a soloist) include the Barbican, Toronto Jazz Festival, Rochester International Jazz Festival, Royal Festival Hall, Ronnie Scott’s Jazz Club, Wigmore Hall, Celtic Connections (with BBC Scottish Symphony Orchestra), Women in (e)motion Festival (Germany), National Opera House (Ireland), and making broadcasts for BBC 2 Proms Extra, BBC Radio 3 and Radio Bremen. Clowes’s music video ‘Abbott & Costello’, directed by Rose Hendry, was shortlisted for Voice of a Woman Awards 2019, and screened at Cannes Lions Festival and Aesthetica Short Film Festival. In December 2019, Clowes premiered Joe Cutler’s saxophone concerto ‘Hawaii, Hawaii, Hawaii’ with the BBC Concert Orchestra, the recording of which has been released on Birmingham Record Company/NMC Recordings (2020). This release was closely followed by a guest soloist appearance with Orchestra of the Swan, interpreting the music of Antonio Vivaldi (‘Timelapse’, Signum Classics, 2021). Recent commissions include writing for the London Sinfonietta (a Sinfonietta Short for solo bass, and their Sound Out projects), BBC Radio 3 (BBC Postcards from Composers, and BBC Concert Orchestra), Onyx Brass, and Architecture of Autonomy (producing music for a dance-film). Alongside her work as a performer and composer Clowes has been curating her own new music project Emulsion since 2012, through which she has commissioned seventeen new works.

Born on May 11th 1984, Clowes was raised in Shrewsbury, Shropshire and moved to London in 2003 to study at the Royal Academy of Music, notably with saxophonist Iain Ballamy and composer Pete Churchill. Clowes was later honoured as an Associate of the Royal Academy of Music (2013). Clowes holds a PhD in Musical Composition, awarded by Birmingham City University (Royal Birmingham Conservatoire) in 2020. Her research project was centred around the activities of Emulsion, exploring collective practice and audience interaction through her compositions, and was funded by a STEAM Scholarship (2016). Clowes is a professor at the Guildhall School of Music and Drama and an ambassador for the charity Donate4Refugees.

“Everything Clowes does has an invigorating purposefulness”
Ivan Hewett, the Telegraph

[above photo by Rose Hendry]