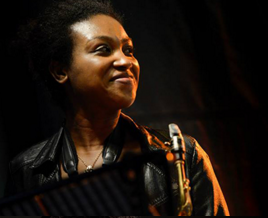 Camilla is a fantastic alto player based in West London. She’s releasing her debut album Isang – pronounced E-S- A-NG (NG as in song) – on Ubuntu Music on Friday 13th January (same as my release date!!) after honing and nurturing her craft by playing with Tomorrow’s Warriors, the Nu Civilisation Orchestra and Jazz Jamaica.

[This interview was originally from January 2017 but some new questions have been added throughout the text in June 2017, as well as questions relevant to future activities at the end.]

“Isang is an old Effik/Ibibio word which means journey and symbolises the musical journey that the CGQ have embarked upon. Effik is the language of coastal southeastern Nigerians and is of particular significance as it is where Camilla was born. The album aims to create a fusion of African, Caribbean and American influences. It will include some music inspired by West Africa but performed in the jazz medium such as Mami Wata- a driving blues written to celebrate Mami Wata a West African spirit often taking on the form of a mermaid which is deeply rooted in the ancient tradition and mythology of West Africa.”

I caught up with Camilla this weekend ahead of her ALBUM LAUNCH at Pizza Express Dean Street on Wednesday 11th January 2017.

What got you into the saxophone?

I had heard a lot of saxophone when i was growing up as my Dad had an amazing vinyl collection and we used to listen to Sonny Stitt, Jackie Mclean and Cannonball together. I had my first go on a friend’s sax when I was 8 and that was it I was hooked!

Wow, what a combo of saxophonists! I’ve been thinking a lot about Sonny Stitt’s vibrato recently… What kind of players are you into from more current times?

The modern sax players that I’m into at the moment are Kenny Garrett who is a massive influence of mine, Walter Smith III, Branford Marsalis, Ravi Coltrane, Joshua Redman, Braxton Cook and Melissa Aldana.

Does your sax have a name? Mine’s called Shirley…

No! I feel left out now! I’ll have to have a think about a suitable name!

You can get back to me on that one then… 😉 Let’s do the saxophone thing…. what’s your set-up?!

I have a 1959 Mark VI Selmer and a Meyer 6 mouthpiece with a ligature that I got ages ago in Italy. I use Vandoren Java reeds strength 3.

For those new to your music, who or what has inspired you the most in your career so far?

Probably the music I heard when I was growing up which was a blend of afrobeats, calypso and jazz. Playing with Jazz Jamaica has been a massive inspiration too!

I can imagine – when did you start playing with that band? What can you tell us about the personalities in the group and the dynamic on stage?

We started playing together in 2014 which seems like a long time ago now! The dynamic is great really as we have all know each other through various organisations like Tomorrow’s Warriors and Trinity so we have a good vibe on stage. I think because I know and trust all the members, I feel comfortable on stage which allows us to get away from the music on the page and create a vibe in the moment.

What can you tell us about the tunes on your record? The titles suggest a story behind each and everyone of them…

Well the title of the album, ‘Isang’ means journey in Efik which is the language they speak in my birth town, Eket. It really means the journey that I have taken in my own development and with my band. My tune Dreams of Eket is about my memories of my childhood in Eket and the time I spent with my family there. Mami Wata is about a legendary mermaid in West African folklore who takes human sacrifices. The subsequent tune, Mami Wata Returns/Usoro is about her little party at the bottom of the sea with her sacrifices! It’s a bit dark I guess! Song for Reds is a tune I wrote in memory of my Dad who passed away in 2011. He was a massive jazz fan and it was his amazing vinyl collection that got me into jazz. He was from Grenada so his nickname was Reds because his hair went red in the sun!

You can’t beat a good cup of tea!

If you could have absolutely anyone – dead or alive – to a dinner party at your home, who would the invitees be?

Where can we buy the album?

From Friday 13th Jan the album will be available to buy from all good record stores and online from iTunes and Amazon.

How did your album launch tour go? And how was the Jazz Jamaica tour? You’ve had an extremely busy 2017 so far!

… Thanks! Yes it’s been a very busy 2017! The tour was great! I was driving the tour bus and there were a few hairy moments with my driving but luckily no major accidents! I learnt a lot from performing night after night. I think we all felt much more comfortable with the music and I really think as a result, our sound has changed as we are taking more risks.

And what’s next for you Camilla?

Well I’m hoping to finish writing my second album by the end of summer with the hope of recording it in the late Autumn. It’s based on a book of African/American folklore entitled, ‘The People could fly.” It’s based around animal tales, supernatural tales and slave tales of freedom. My mum used to read it to me and I have always been fascinated with it.

Thanks so much Camilla, I look forward to hearing the next installment!