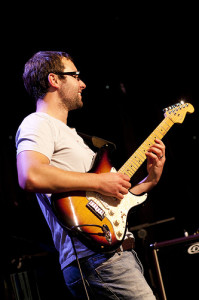 How do you like your eggs? (just for future reference when I’m ordering breakfast for everyone on tour because you’re all about to miss the deadline for food)

How many guitarists does it take to change a light bulb?

10.  1 to actually do it and the rest to stand around saying, “well I could have done that much faster”

How many chords can you stack on top of each other in 10 seconds?

I only know G, C and D, oh and the Hendrix chord but it hurts my fingers.

In your dream studio, how many guitars would there be?

I only need my strat, that’s how rock n roll I am.  As long as a studio, or any venue has hot running water Im fine, I HATE not being able to warm my hands up properly.

And in your studio, who would be recording with you? (Dead or alive)

It’s a tough question.  At the moment Im really into this slide guitarist called Lowell George who fronted the band little feat, they were a southern country/rock band who sounded a bit Sly and the family stone also.  He also played saxophone on some Sinatra sessions and played for a while in Zappa’s Mothers of Invention, and played the guitar part on just kissed my baby by the meters. He was an unbelievable musician.  He died by the time he was 34 weighing 22 stone due to his many addiction problems.  I reckon he would have so many cool stories to lighten the mood when you’re on your 4 millionth take and you still can’t nail it.

When you’re writing how do you come up with the tunes?

It depends very much on the band Im writing for.  Most of the times it comes from a more abstract place, such as films or characters in a book. I try to imagine what the soundtrack to them would be like and start working ideas from that (apologies if that sounds pretentious).  If Im writing for Troyka everything comes from a more rhythmic framework.  I try to use rhythmic counterpoint across the keys and guitar, placing things in the gaps of the other and trying to come up with a clave we can use to improvise in.  Often this music is more atonal than other ways I tend to write, but having played with the guys in that band (Kit Downes, Josh Blackmore) a lot I know exactly what sort of devices they enjoy improvising on, and to be honest they often come up with better ways of playing it than I could ever write it.  In something like the Threads Orchestra, which uses strings, I need to focus more on strong melodies.  I’ve written several character pieces of actors that I loved as a kid, really eccentric types like Gene Wilder and Oliver Reed.  I’d love to have the balls to write proper country songs though, I just wish I could sing!

Any interesting gigs you’ve got coming up?

Yeah, thanks for the chance of a plug!

30th October with you actually, and Ryan Trebilcock and Tim Giles at the Riverhouse Arts Centre (Walton on Thames)

19th Your band at the Clore Ballroom

How much are they to get in then?

How do you know when its the right time to crowd surf?