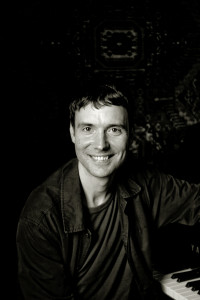 I first met Hans Koller when he came into the Royal Academy of Music to do a big band project with us (the students at the time). I immediately loved his music, the melodies and sounds he was finding in the big band setting, his approach and explanation of the music to us. I remember particularly enjoying an arrangement of ‘Marshmallow’ by Warne Marsh. This incredible, giving musician has quite a biography which you can read here. But just to pick out a few highlights: touring with the Mike Gibbs big band feat. Steve Swallow, Bill Frisell and Adam Nussbaum (which I remember being a very awesome gig); commissions for Birmingham Jazz and Freden International Music festival; writing for Steve Lacy, Evan Parker, Kenny Wheeler, Bob Brookmeyer, and the WDR big band…. The list goes on!

How did you find music – playing and composing – growing up in a rural part of Germany?

Well, I hope that Bavarian Beer Tent music didn’t influence me too much, although it’s true I heard a lot of that stuff. There were/still are? Lots of 200-500 inhabitants villages in Bavaria, each has a football team, failing that, a fire brigade or a bee-keepers’ club, and there are always some get-togethers, jubilees, cup competitions, et cetera, and there are always brass bands involved. I thought they looked much nicer than they sounded, though. It’s sort of an inverse Gil Evans: Lots of instruments and a thin sound.

Anyway, I cared so much about football, that the music didn’t bother me.

By contrast, at home, my family played classical music, and we sang a lot, before every meal, and although I didn’t follow this with any enthusiasm, I have a few fairly early memories that I cherish:

My mother writing down a piece that I came up with on the piano, my late father playing Hindemith’s Ludus Tonalis, and then going off improvising freely, one of my sisters bringing home The New Tristano on vinyl, also Organ lessons in the cold church on a Saturday morning at 7.30. (last bit I didn’t cherish so much at the time…)

After all that, at around age 16 I got the jazzbug, and then it goes all very quickly: At a jazz summer school in Ingolstadt, a sleepy town near Munich, I played alto saxophone in a small band led by Harrison Smith. He brought in Herbie’s Eye of the Hurricane. I stared into it for a whole week, scared to death, but it changed everything for me, and I knew jazz had to be my life.

Do you find you have had ‘phases’ through your career, perhaps focusing on a particular instrumentation or method of writing, or different styles?

In hindsight, yes, you go through phases although for me it’s never really been about styles. I must admit I’m not the most open-minded, never was, when it comes to embracing every kind of music on the planet (and of the spheres), especially a commercially driven kind, so from the beginnings to today it’s been about understanding and trying to communicate in the essence of jazz, whatever that may be. I feel very protective of our music, and I don’t like it very much when people attack jazz, and make divisions between say Sonny Clark and say Alex Schlippenbach. Let’s moan about the fat cats running the banks, not paying taxes et cetera instead.

In terms of composition, I have been trying to learn about pretty much the same things for many years now: How to get from one note to the next, how two notes sound good together, how rests can sound amazing and also crap sometimes, why certain things sound big, other small, how a phrase can make a bar line disappear, how sometimes a bar line is a beautiful lifeline and so on.

It’s so tough that I felt I couldn’t really do it, so I got help from the old masters, and also making friends and getting bands together, and learning by trial and error.

I got my harmony together from learning tunes by Kenny Wheeler and Ralph Towner, and other ECM people that I was totally hooked on from around 1991 when I came to London, and started writing purely intuitively but influenced by that music. After I studied music formally I met Mike Gibbs, and he gave me some A3 manuscript, and wrote out the instrumentation of the big band on it. He said, quoting Carla Bley, ‘all the high notes to the little instruments, all the low notes to the big ones’. I can’t think of a better orchestrator than Mike, a real master of colour.

In 2006 I studied with Bob Brookmeyer, who actually had a method of composition, a method of developing lines which relates to both the old counterpoint and the serial writing of the 20th Century/Contemporary music – but like George Russell, another hero of mine, the folk/blues element of the music is always there.  He was an inspired and inspiring teacher, and I have my work cut out for the rest of my time.

Do you yo-yo between practising and writing or does it all happen together?

I practise trombone every day, I can’t afford to miss a beat. The piano is more forgiving, and unlike the trombone, I grew up with it. I’m not a chopsy piano player, which can be a bit depressing but the advantage is that when I’m very rusty, nobody notices! I have had my spells in the past, one summer I studied the Shostakovich Preludes and Fugues, I was on my own, I literally played all day and part of the nights, too. I had a ball, but you go mad after a few months! Writing’s a bit different for me, I think about it a lot, so when it’s eventually ready it goes quick, and it’s a bit of mystery lasting for a short time only while the basic stuff appears. Then the long while is the question of what to do with it, how and where to start chipping away, making something meaningful of it all. This involves a lot of fretting, and wishful thinking, but most importantly, full consciousness and patience.

Which players/composers do you feel have influenced you the most? (Directly or indirectly)

In 2003 I made a record with Steve Lacy, and I would say today that he was the single most important musician for my personal development because I learnt something about the finite but endless process of learning, about the (spiritual?) relationship of music to art and life. After that you don’t want to open your car window anymore to drop an empty bag of crisps on the floor.

I love the cheesy keyboards on Vince Mendoza’s early records.

Thank you Hans for such a fascinating interview…

Hans Koller is performing with a new ensemble at Kings Place on February 9th 2013 and I would urge you all to go!