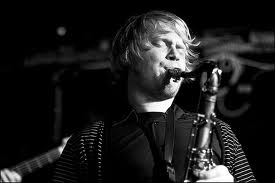 So for this interview I get chatting to saxophonist Tom Challenger, a fine Yorkshireman living in the heart of South East London down the road (on the 185 bus) from me… I first met/heard Tom when he was studying at Guildhall, playing with all the people I was first getting to know when I moved to London.

So Tom, how did your saxophone find you?

I started on clarinet  – by the time I was 11/12, it seemed the logical thing to do. My interests in music were developing, and I was a restless character back then. My first horn was a Selmer Pennsylvania. Completely out of tune, but looked amazing.

Difficult…my old baby sitter and parents will say that my first musical ‘expressions’ if you like, were renditions of the Eastenders theme tune. My first memory isn’t this though – rather just the songs my parents played at home, and the songs we sang at nursery etc. Pretty standard.

I’ve a few extended things together, and I’m always trying to develop others (and also bury some…). I never really go out of my way to be ‘comical’ per say – maybe it sounds comical!!! however, I do have a penchant for a very sharp high B flat. Simple, but very effective. My Microtonal playing isn’t great, however it’s (albeit slowly) getting better. I find the potential for greater colour within one’s playing is enhanced by these ‘other’ notes, as opposed to a duck sound, or flutter tongue (which is a bit on/off).

I’m not very good at eating after I play. People always get pizzas in after shows – I get really bad heartburn with pizza after playing. Im’ going to go forrrr…..hmmm……nuts.

Let’s now talk about your duo album with Kit Downes, ‘Wedding Music’. The information up on the web explains the concept pretty thoroughly:

“When discussing ideas for a potential collaboration, their mutual love of Organ works (Hindemith, Messiaen, Vierne), melodicism and durational concepts suggested that this initial idea could be something interesting and importantly a further artistic step forward for both musicians. Beautifully recorded over 3 days in the summer of 2012 in Huddersfield University’s St Paul’s Church (a space renowned for its acoustic qualities), the album is a selection of some of the music developed in residency.”

What else can you tell us about it?

I think for me the whole process was a massive learning curve – or rather, a process that led to change in my focus as an improviser and composer. Kit and I have known each other for a long time, and played together for a long time – but not in an established context (it’s always been in other people’s groups, or where Kit stood-in in another group of mine – MA). This was the first time we really banged heads together (positively!), and I feel the music really stands alone – simply because WE developed it together. Before, I wrote traditionally (i.e. by myself), or simply work-shopped other peoples ideas (I do a lot of this with Dice Factory). However, this was a case of coming up with ideas together, developing them together and executing them together.

Your playing on that record is stunning Tom, your sound world is very inspiring to me, and I’m sure to any one who listens.

Tom, can you take us on a little journey through the key musicians who have inspired you through your life so far?

There are key discoveries (some of which are musicians) for me.

Firstly was buying my own records. Not necessarily the best music (some is cringe worthy), but so important in the sense I was going out to TRY and find what I wanted – not just listening to my Parents’ discs.

Secondly: Funk, Hip Hop – this took me away from a lot of the indie stuff I listened to and into music closer to…

3) Jazz and specifically – Improvised music. My first record I bought was Live-Evil. I think this (despite its sound world) lay down markers for me which have been so important: Ensemble, Energy, Composition, Sound world.

I know we both love Mr Shorter, so can you give us a brief rundown of favourite Wayne moments, perhaps the less well-known stuff…?

They change all the time. The best ever is his solo on Harlequin. I know it’s in the studio etc…but…I wonder how long it took him to play that? 1 take? I’m going to sell myself that for the rest of my life.

Atlantis is incredible because of how incredible the music has been prepared – arrangements like that don’t come cheap. I like (love) the latest instalment of the Quintet bootlegs. He was playing in a way at that time (with Miles Davis, Chick Corea, Dave Holland and Jack DeJohnette) that really shows how he can bend. He’s so adaptable. And then…’Spring’ by Tony Williams. Don’t want to say many more – there’s a lot. Too much!!!

Your band Brass Mask (as opposed to Brahsk Mahsk) released their first album ‘Spy Boy’ last Autumn on the Babel label, how did this band start? How did you choose the repertoire?

I developed quite a lot over 18 months. I had a lot of inspirations going into this period – The Mardi Gras Indians, counterpoint lessons with Hans Koller and the music of Henry Threadgill to name a few. I developed the repertoire so as to provide contrasts to the other repertoire, but also to expand the sound of an ensemble like this. It’s quite easy to fall in to the whole ‘second line’ bracket with an ensemble like this – thankfully I think we avoid it! Not to say I don’t love that music (Second line), it’s just something I don’t want the whole set to be like.

Final thought for now… How many times do you check the contents of your sax cases before leaving the house? (I do this about 5 times!!!)

Interesting question. I never really do, however I do tend to forget my strap sometimes. What people really need to be careful of is making sure to check what’s attached to the OUTSIDE of the case before leaving home. I once made for a gig with a Bra unfortunately caught in-between the two halves of the case. Some poor woman had to point this out to me in Archway tube station after I’d been out and about for a couple of hours. Obviously, IT WASN’T MY BRA.