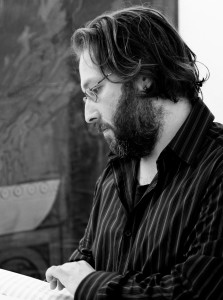 Joe Cutler is a fantastic, versatile composer, clearly a really open-minded kinda guy! He is currently Head of Composition at Birmingham Conservatoire and is a founding member of NOSZFERATU, a contemporary music collective with Dave Price, Finn Peters and Ivo De Greef. For his full biog, have a look at his website: http://www.joecutler.com/

I met Joe very recently after Cheltenham Music Festival commissioned him to write a piece for the Emulsion Sinfonietta, who are performing at the festival with Food (Iain Ballamy & Thomas Stronen) on July 4th – gig details here: http://www.cheltenhamfestivals.com/music/whats-on/2015/emulsion-sinfonietta/ We also have some lovely mutual friends in the forms of Percy Pursglove and Hans Koller!

So are you a football fan then Joe?

I used to be a big football fan and as a teenager would go and watch the local teams where I grew up, mainly Watford and QPR. I don’t watch as much these days but I’m still intrigued by different formations and the way that individuals function within the structure of a team. My new piece, Karembeau’s Guide to the Complete Defensive Midfielder for Emulsion and Food looks at the “floating” role of the defensive midfielder where the player is giving a much freer role within the overall skeleton of the team, moving between defend and attack.

I noticed your piece for the New Music Biennial includes a table tennis match – are you a massive sports fan?

I grew up in a table tennis-mad family, and my brother went on to represent England so when the Cultural Olympics came along in 2012 it seemed the perfect opportunity to put music and table tennis together. The result is a piece called Ping! for string quartet and 4 table tennis players.

Which instruments do you play?

My first instrument is the violin and I improvise a lot especially when composing. I also play piano and have a trombone floating around in my studio which I blow when I’m procrastinating.

Your record Boogie Nights is fantastic, can you tell us a bit about that?

Thanks! Well Boogie Nights is also the title of the first piece on the album which was written for the Dutch group Orkest de Ereprijs and one of the world’s largest mechanical barrel organs called the Busy Drone, made in Belgium in the 1920s. It’s a sort of concerto with lots of interplay between the “live” band and organ. The musical material draws both on dance music from the 1920’s and 70s funk.

What’s been your musical route through life so far?

It’s been very varied with lots of twists and turns. I grew up in North London playing both in orchestras and bands. In the late 1990s I spent three years studying at Huddersfield Polytechnic which was fantastic as we were exposed to so much new music and had lots of opportunities to write pieces and work closely with musicians. The festival was in full swing and was packed with the legends of the avant garde like John Cage, Messiaen, Ligeti etc and we would see them wandering around, and sometimes meet them too. I went to Warsaw to study for three years in the mid 1990s. Being surrounded by a very different musical scene was really liberating and made me challenge all the things I had taken for granted. Then, in 1997, I won a prize at the Gaudeamus International Music Week in Amsterdam which opened a new door. I work a lot in Holland now and find the scene there really open with a very flexible attitude towards genre which I really like. Then there’s Noszferatu, a group I’ve been a member of since we formed in 2000 (with Finn Peters, Ivo de Greef and Dave Price) which has been very important for me, working closely with close friends. Teaching too has been an important part of the journey and working with composition students at Birmingham Conservatoire. That’s something I find really inspiring and I learn as much as the students.

You have a really refreshing open attitude towards the performance of your music, really working with the musicians. Do you have a preferred setting for your music or do you like evolving with each project?

Composing is much more fun when there’s collaboration. Hearing an orchestra play something you’ve written is quite amazing but that’s usually one of the least collaborative situations. I enjoy working closely with musicians and allowing surprises to happen.

What has been your most rewarding commission/project to date and why?

They’ve been so many rewarding projects that it’s hard to single one out. Projects where I have to step outside my comfort zone are always interesting, like Ping! and Boogie Nights (and the new piece!).

If you had to write a piece with only 3 notes, which 3 would they be (including octave)?

Right now, B below middle C, middle C and the D a ninth higher. But tomorrow it’ll be different.

Thanks so much for the interview Joe – can’t wait to play Karembeau’s Guide to the Complete Defensive Midfielder on July 4th!