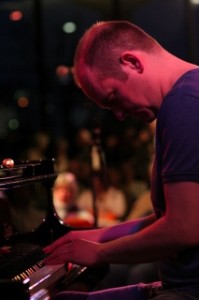 Liam Noble is an incredibly inventive pianist and composer, praised most recently by Dave Brubeck for  ‘going so far into the unknown’. I saw Liam on many gigs while I was studying but I didn’t meet him until I graduated – at the time I was taking the odd lesson with various musicians as a way of continuing my study. I had a great time with Liam talking about many interesting things, approaches to playing music, how to think about music and the jazz scene – he also introduced me to Henry Threadgill…

One coffee a day (normally about mid morning, is all I can take…cups of tea help measure the day’s progress if I’m at home, but I’m sure I don’t need them really!)

How did you find jazz – or did jazz find you? Did your parents listen to it when you were a child or did you find it later in life?

My parents got me into Scott Joplin when I was about 12 I think, maybe even earlier…they liked that film “The Sting”, which has Joplin’s music all the way through.  From there I traced a random path through the records my parents had (Miles Davis “Someday My Prince”, Jimmy Giuffre “Travellin’ Light” and Cannonball “Live At The Lighthouse”.  These are all still favourites of mine, more so than the established records like “Kind Of Blue”;  I think the way you hear stuff at a certain age and obsess over it determines its role in your development.  Of my parents’ collection, “Louis Armstrong Meets Duke Ellington” was my favourite though; Ellington’s approach to sound, ideas and bandleading is still foremost in my imagination most of the time.  And he represented a more playable, improvised version of the stride players like Fats Waller and Jelly Roll that I was into.  Then I found the Ellington and Coltrane record in Bromley library and I was off into a whole new thing.  So I guess I was always into jazz and classical music as a kid, and pop music existed in a kind if parallel, more socially acceptable part of my brain. I liked The Specials and The Beat, then heavy metal…it was a strange time, but I always saw it all as part of the same thing; it’s all about finding the right sounds for the thing you’re trying to do…

Jazz became a symbol of freedom for black Americans in the early 20th century. Due to its liberal and creative nature, jazz has previously been banned in countries where – at the time – the government had/wanted strict control over its people (such as Cuba, Poland, Russia  and Nazi Germany). What does the freedom of jazz mean to your average un-oppressed British person?

Hmmmmm, that’s a good question…I don’t have a simple answer, except to say that people enjoy making things for all kinds if reasons.  I’ve always felt that oppression exists for individuals as well as social, ethnic or religious groups; it starts in your brain.  Everyone has their reason for taking themselves out of the external world in order to focus on something within them that then (hopefully) emerges as something artistic.  I feel that this tendency is important to draw upon if you are trying to make good art in any area.  Of course, in conditions of widespread social or racial oppression this can be much more potent, necessary even…but…I certainly wouldn’t dare liken my personal situation to that.  It just feels potent and necessary to me too.  Woody Allen once likened making films to the raffia baskets that inmates of psychiatric hospitals used to be given; something to quieten the mind I suppose!

Speaking of music that has the power to affect the mind, I know you’re a fan of the ‘Rite of Spring’… Have you ever thought of adapting that in some way for jazz performance? (or is that just sacrilege?)

Funnily enough I’ve got an Alice Coltrane recording where she does just that…Stravinsky’s sonorities and rhythms seem to be all over the jazz vocabulary already, just think of those two triads a tritone apart in “Petroushka”.  But I think there’s still a lot to be drawn from his later work, some of the chord structures and polytonal lines fit right in with a jazz approach; primarily, it seems to make everything more rhythmic.  I used to have a tape with Ellington’s “Far East Suite” and Stravinsky’s “Symphony In 3 Movements” back to back.  It’s amazing how, if you listen to things obsessively like that, they become more and more alike.  Stravinsky’s use of the piano isn’t that different to Ellington’s in many ways, it seems to punctuate the main action with bell-like glints of light…I like this process of trying to tie things together in my head.

Sacrilege seems a good evaluation of a “jazz” Rite Of Spring, but there’s always the possibility that someone will turn that preconception upside down.  Not me though!

Your ‘Brubeck’ album has found a truly special musical place. What drew you to Brubeck’s music?

Thanks, that’s very kind of you to say so.  Brubeck was one of my early influences, he had lots of modern classical influences in his playing; I liked the contrasts in his music, nobody played like him.  And nobody seems interested in covering his music, yet he’s incredibly popular and edgy at the same time.  Those ingredients seemed interesting fodder for investigation…I suppose it was partly quite practical too, I wanted something I could gig with in the UK that people actually liked.  It can be hard introducing people to original music here; but Brubeck’s tunes are so strong that you don’t need to play by the book….there’s a live album with him playing with Lee Konitz and Anthony Braxton where he out – weirds everyone else…I like people that can do that without it seeming contrived.  It’s a balancing act that has always inspired me….

You worked with Michael Rosen (the poet) a few years ago, have you ever turned your hand to writing lyrics?

Good grief no; I’m a big fan and ignoramus when it comes to poetry.  I don’t understand how it works, what it means or whether it’s any good or not.  But I do like some of it, for reasons I can’t fathom.  I feel like I just recently discovered the idea of sounds in words, it’s a whole new world.  With regard to my own writing potential, if I had anything to say I would say it.

So amongst other things, you’re playing with a trumpet player, Peter Evans on May 5th at Café Oto?

Yeah, he’s pretty amazing, can sort of play everything on the instrument (which I normally don’t like, but he really can)

You’ve just been on tour with Julian Siegel’s band to promote his new album “Urban Theme Park”, are there any other recordings on the horizon?

Yeah, with Zhenya Strigalev, hopefully recording with Eric Harland, Larry Grenadier and Tim LeFevre in June. And there’s a new “Sleepthief” album with Tom Rainey and Ingrid Laubrock coming out…

How many jazz musicians does it actually take to change a light bulb?

A new light bulb is normally just a rehash of one of the old ones.

You can buy Liam’s albums at jazzcds.co.uk and his website is www.liamnoble.co.uk/

And as well as the gig at Café Oto, Liam is playing with Kenny Wheeler and bassist Andrea Di Biase at the Vortex on the 9th and 10th of May.