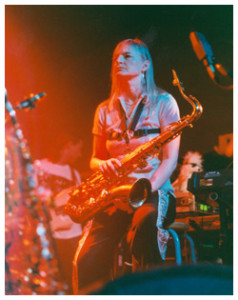 Last Saturday I went to meet the saxophonist/composer Barbara Thompson. I also got to meet her lovely husband Jon Hiseman (drummer, engineer, sometimes gardener). I had such a good time that I wanted to share it with all of you.

Barbara has been in this business a long time. You can read all about her impressive array of projects here: http://www.temple-music.com/tm05on/html/barbara.html so I won’t repeat what is already available to read.

The first thing that struck me was how welcoming and calm both Barbara and Jon are. I guess that’s something that comes from being at one with one’s self, knowing that you’ve achieved quite a lot of your goals in life. Barbara gave me a CD of vocal works she had written and showed me this line: “Where roads are made I lose my way”, pointing out that it’s only worth taking the roads you make for yourself. That line was taken from “The Unseen Way” by Tagore and the album of vocal music is called “Journey to a Destination Unknown”.

We got a cup of tea and listened to Barbara’s new works for the Apollo Saxophone Orchestra which have been recorded and are being mixed at the moment. The pieces that really stuck in my mind were her piece called “Dear Bach” and a new arrangement of “Green” which I believe has taken many forms in recent years. The orchestra will be promoting the new album at their debut  concert at the World Saxophone Congress on Thursday 12th July. The congress this year takes place over 6 days at St Andrews in Scotland –  800 saxophone players from all over the world are expected to attend.

I then put on some of my new album material and we discussed possible album titles etc. Barbara is a generous listener – instantly listening for all the right stuff and pointing out the things that only an experienced musician would observe. Later Jon had a listen too and an extremely helpful discussion about how to carve a career ensued. Such lovely, helpful and interesting people.

I was given a tour of the house – it’s the kind of house you always dream of owning. Open plan kitchen and huge space with a grand piano looking onto the garden… a studio out the back filled with microphones, drums, another beautiful piano, engineer’s room… upstairs Barbara’s study is filled with scores, works in progress, the latest in Mac technology, an upright piano and another room filled with saxophones. And it’s so clearly an amazing family home too.

We had some lunch, discussed how important it is to do your albums, write your music, play gigs and not worry about whether you’re going to change the world with it – just do it – and inevitably over time you’ll realise which is your best work and you’ll get to know yourself as a musician.

Barbara has written most of her large works in the last 10 years or so. Some have been performed, some not. She has a website where you can download quite a lot of music for free and I would encourage any group looking for some interesting new music to perform to have a look, there are all kinds of line-ups there including orchestral works. http://www.barbara-thompson.co.uk/index.php

I get the impression Barbara and Jon are people I will see a lot more of now that I’ve met them. I hope you all enjoy checking out Barbara’s websites and having a look at all the amazing things she has done with her life.