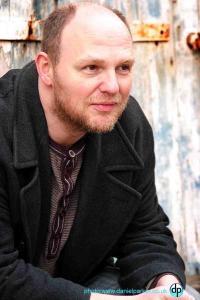 …do whatever you want!

T. rex octave pedal. Gives you octave up and octave down with a ton of control of how we use them.

If you had a time machine which year would you go back or forward to?

I think maybe I’d go back to Dinosaur times.

[Nice connection with the T-rex pedal there…]

I’d be armed with a pepper spray and a gun that shot a love potion so that love, not war, would be on that funny, crazy bifurcated, creature’s mind. Also, my time machine would be voice activated so I would just say the year and I’d immediately go to that year. I’d also go back to the 8th Century. That century gets a raw deal. When did you last see anything about the 8th century on prime time telly?  I’d leave hidden notes everywhere telling my kids how much I loved them and telling them not to invest in the Stylophone or Balaclavas. Then I’d go to the future, when they’re around 60 years old to see what the latest trends are…. then I’d go back to the 8th century and add those trends to the notes so they could invest in those trends before those trends trend then I’d come to the present and give them clues about the notes I’d left but I’d be enigmatic about it. I find it difficult to stay on track with these questions, Trish. My mam said I was a gawp sometimes.

Would you ever agree to a reality television appearance? And if so what would be your terms?

I was asked to do this for Channel 4. I refused. But if I did agree to do it, my terms would be as follows;

What’s your favourite guitar string and why?

My fave guitar string is the B string. It’s a maverick. A lone Wolf. A Kodotic (that’s a word that means – ‘a word that should exist but doesn’t’. The actual word, ‘Kodotic’ doesn’t exist. I love that. The meaning exists but the word doesn’t. Have I gone off piste?

Mike that is quite brilliant! Such a fantastic antidote to all the meaningless things that we’re stuck with! Like…. well, the appendix – no one knows for sure whether there’s any point to that.

So with all this discussion of ‘meaning’, can you explain the concept behind your project ‘Ropes’?

[see what I did there?

‘Ropes’ is a 3 movement piece that I have written as part of a broader work that I’m hoping to bring out as an album next year. ‘Ropes’ has a theme moving through it both Melodically and Harmonically. It also has a narrative theme etched into the sinews of the music. I always wanted to say ‘etched into the sinews of the music’, and now I’ve actually said it I feel a weight has been lifted but I also feel a loss somehow. This is how described my idea behind the project elsewhere…

“When I write music, I write for people in my life, both close and not so close.  For me, the music is a reflection of the situations and events that make the beautiful struggle so rewarding.  I called the suite ‘Ropes’ because I became interested in the lines that, musically, spiritually, physically and metaphorically bind us together or pull us apart.  There are sea shanties here, cliff faces scaled, folks towed home and freedoms fettered.  Ropes can be a help or a hindrance.”

Funding it will be tough. The logistics are complex. Music written for a Quintet of improvising individuals and 22 ‘straight’ string players is a precarious business as you know all too well. But I have to make the effort. I can’t have it lounging around in my brain ad infinitum.

Yeah, it doesn’t sound healthy to keep that music locked up – free the ropes!

So who’s in your quintet?

The quintet is Iain Dixon, a great Sax player who also happens to be a wonderful Clarinet player (the 3rd movement is for Clarinet and Strings) – I’ve worked closely with him for many years, although not so much these past couple of years, so it’ll be fantastic to work with him again. Les Chisnall is an under the radar piano player I’ve also know for many years. Beautiful player with one of the best touches I’ve heard. Adam Nussbaum and Steve Rodby I’ve been working with in the Impossible Gentlemen, of course, and both have experience in Orchestral situations. Steve is a post production genius as well as being a great player so it’s great to have him on board. Adam did the original concert and sculpted the music in such a beautiful way…. plus he’s just so encouraging…. phones me from the States just to say…. ‘Mike…ya gotta get ‘Ropes’ recorded, man’… I’ve had inspiring support from all the guys.

And where can we read about the string players? Are you going to encourage them to delve into the world of improvising in some way?

The String players are more like a bespoke collection of players from different ensembles/Orchestras. Ben Holland, a great lead Violin player got most of the string players together for the concert and if we get the go ahead funding wise, he’ll work on that side of things. Yes there is a piece where the string players improvise. I worked out a way for them to to get into Harmonic zones and asked them to respond to what they hear around them using their instruments in whatever way they felt was appropriate. They were unsure at first, the question hovering overhead, ‘is this right?’… they eventually got used to the answer, ‘it’s right if you heard it’.

Is this project an answer, or ‘episode 2’ or even a bizarre prequel (with our time machine) to your first album Madhouse and the Whole Thing There (2008)?

No, But I have written an album’s worth of material that will be a follow up to ‘Madhouse’. It’s called ‘The Things that make the Darklings sing’.  I’ve been fascinated with the Darkling as a creature of the night ever since I discovered them in Keats’ ‘Ode to a Nightingale’ some years back. They’re the opposite of ‘Sparkling’.. they live beneath the earth and come out at night when the world’s asleep and I think are generally mischievous little things, though I’m not sure that Keat’s had these creatures in mind in ‘Nightingale’… this was more his love affair with Death, I think. Anyway, my aim was to make the Darkling sparkling.  It harks back to the content of ‘Madhouse’… but it’s more what was born out of the situations that penned that particular music.

Yes, well, we’ve spoken about these Darklings before… You heard it here first folks! Sparkling Darklings coming soon to a listening device near you! Along with those tangled Ropes…

If you were a sparkler what word or sign would you make in the dark?

Easy. I would trace a picture of a look I was once given in a far off place. And, underneath, I’d write ‘Dazzlious’.

Mike will record ‘Ropes’ for 22 piece string orchestra and jazz quintet in 2015. You can now donate in support of the project via his Crowdfunder page here. Have a read about the project here.

Also have a listen to Mike talking about the project here on Youtube.

Mike’s first CD ‘Madhouse and The Whole Thing There’ is also available to buy from CD Baby and Jazz CDs. See his discography for more info on the tracks.