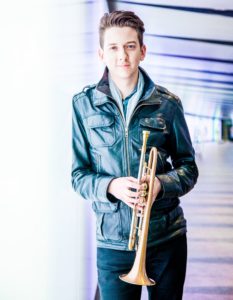 Freddie Gavita is a fabulous trumpeter and we go back quite a few years now… he appeared on my first record Tangent and at Emulsion III & IV. He’s just about to bring out his debut record Transient so I thought I’d get him to answer a few questions for my blog…

So Freddie, what are you up to today?

Hey Trish! I’m travelling back from France today, having a lovely time on the Eurostar! I’ve just made my debut with Kyle Eastwood’s band, depping for the dapper Quentin Collins.

The signal is a bit poor here, and I haven’t really had time to get on YouTube. I always download the Spotify ‘discover weekly’ playlist to inspire my record collection, and I can safely say I’ll be purchasing the Brad Mehldau / Chris Thile duo album.

Yes, that album is brilliant… My husband was lucky enough to hear them live in Ireland a few years back so he’s been on the look out for that album for a while…

For the uninitiated, can you give us a quick run down of the Freddie Gavita Story so far?

It began in the Norfolk and Norwich hospital in 1985. Teenage years were spent playing the trumpet and lamenting the fall of my beloved Norwich City football club. Not much has changed! I recently got married to the very beautiful and wonderful Emeline (a Swiss national) so my appreciation for quality cheese and promptness has increased dramatically.

It’s been an exciting year for you… Recording, crowdfunding, new album out soon… what’s the date of the launch?

The album launch is on April 19th upstairs at Ronnie Scott’s, and will be available to purchase on April 28th. If you can’t wait a week, come to the launch where it’ll be on sale in advance! I’m quite pleased with it if I may say so myself, Curtis Schwartz really captured the sound of the band perfectly and Carl Hyde’s photography and artwork is sublime.

Who’s on your record?

Tom Cawley, Calum Gourlay and James Maddren. Doesn’t get much better than that!

And how do you know these fine people? How long have you been playing together?

Well, I studied at the Royal Academy of Music with Calum and James (and YOU TRISH!), even living with them for two years. I don’t think they’d be up for it now. And Tom was our aural and transcription teacher, and was such a tremendous influence that we renamed Wednesday as Tom Cawley Day in his honour. The band has been together for 10 years (since my final recital) so we’re celebrating our 10th anniversary with a debut album!

Does the album feature your own music? Tell us a bit about your choice of repertoire…

Yes I wrote all the music (it’s cheaper than paying to play other people’s compositions). We recorded thirteen tracks and I had to whittle it down to ten, so there’ll be some extras to put on the vinyl reissue double album. I’d like to think it’s quite melodic music, I like to write in a way that gives us something to get our teeth into, create a framework for openness without alienating an audience. Basically the tunes are simple but the chords are hard.

What are you enjoying listening to at the moment?

When you’re not playing the trumpet, any hobbies?

Not really, it takes up most of my time to be honest! I’m trying to read more, I’ve always been interested in how the brain works, how we make choices or react in certain situations. Mainly pop science though!

I play FIFA on the XBOX to wind down, it’s a guilty pleasure, but it’s the only way Norwich will ever win the Champions League….

I also drink far too much coffee.

Me too…! What’s your favourite fairground ride?

I’m partial to the dodgers, but I’m getting old now, so maybe the tea cups? Rollercoasters are fun after the initial shock, but I get dizzy for days afterwards…

Marmite in the morning, jam in the afternoon!

Do you believe in Unicorns?

I believe in miracles. And a unicorn would definitely be a miracle, so yes.

Now more than ever! And aliens… 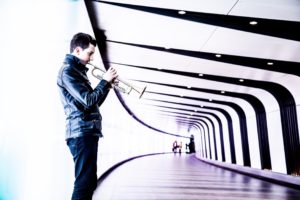