Joe Wright is a true individual. Saxophonist is merely the beginning of how one would describe his activities and contribution to music and art! We met through the jazz scene in London and have had many conversations, shared listening experiences (both big ‘Food’ fans) and more recently some playing. Joe is launching his EP ‘Yarrow’ tomorrow night at the Red Door Gallery in Greenwich – an event I look forward to immensely!! – more details below.

Where shall we start Joe? Can you introduce us to your Soprano Sax, what’s his/her name? Any curious features?

Hah! Sadly the poor thing doesn’t have a name, perhaps I ought to have given it one by now. It’s quite an ugly saxophone, with a weird matte gold colour body and shiny gold keys (I’m not a fan). The saxophone also has a silly detachable bell that Borgani put on their saxophones. I came to it on a long search for a soprano I liked. Having tried everything else in the shop I thought I’d give it a go just in case, and I loved the sound and feel of it. I’ve been playing it for years now, and thankfully that strange matte lacquer is starting to wear off.

When/how/why did you choose solo soprano for this new EP, Yarrow? When did this musical journey start for you?

Recording my first solo EP was a big learning process, and made me think a lot about my approach to the saxophone. Since releasing it last spring I have been thinking that it would be a good thing to do again, possibly making small recordings on a semi-regular basis. It’s also a lot easier to have an ongoing recording project when you only have yourself to worry about.

I knew I would be staying on a narrow boat for some time as part of a tour in the autumn. Being away from London and my regular collaborators, I thought this would be a good time to focus on a new recording. Choosing the soprano was a practical consideration really, those boats are pretty small!

Oooo, a small boat – canal boat? What were you up to? I’m intrigued!

I was on tour with Under Foot, a movement/music show that I worked on last year. We were working in a children’s theatre and a special school in Bath for a couple of weeks and a friend of a friend had kindly lent us his narrow boat as accommodation. The shows were going on during the day, and in the evenings I was at the boat with no internet, dodgy phone signal and nobody to hang out with. It was good to have a project to keep me busy!

Is there any music that has particularly influenced or interested you in the creation of this EP (or the path to creating it)?

The EP has largely been created out of the desire to explore the possibilities of my instrument, and become a better improviser.

I have been attending Eddie Prévost’s workshop for the last few months. I have found the searching nature of the workshop really liberating, and have been greatly inspired by the musicians attending it. The regular workshop concerts at I’klectik, gigs at the Hundred Years Gallery and recordings on Matchless and Earshots! are good places to hear them play. Listening, talking and playing with people at the workshop as made me re-assess a lot of what I think about improvising. I wanted some of this process to be reflected in the music I planned to record that autumn.

Alongside the workshop I have been playing regularly with Tom Taylor and James Opstad in the trio, duck-rabbit. Our music has shifted towards a much more textural aesthetic. I felt that my ability to play quietly with more unpitched material in this group was greatly lacking. Recording in the evenings, isolated and needing to keep volume at a minimum was an ideal limitation for exploring such sounds.

Perhaps tell me a bit more about Duck-Rabbit… How did the 3 of you start playing together? Do you set objectives (musical or other) for yourselves or do you let your minds wander and see what you come up with? Any recordings out there?

The group came about by chance, James had invited me to join in with a play he had organised with Tom. We were all getting into playing free improv at the time. That was a couple of years ago now. As soon as we had played, we all agreed that we should continue playing as a group. From then we have been playing every week. Our aim is to be able to improvise with our instruments and electronics, and have a band that could transition between acoustic and electronic worlds within the same improvisation. We had kept the electronic and acoustic sides of the band separate until the beginning of last year. It was too much to try and learn about everything all at once. We have always just played when we’re rehearsing, but we also talk about improvising, go to gigs and listen to music a lot as a group. Much of our development has sprung from this shared experience as well as the playing. We have a few EP’s out now. Part IV of our electronic series Scattered Voices, has just come out, using sounds recorded at a working grain mill. Our first electroacoustic EP, Accretion, is also on our bandcamp, along with some videos from the recording.

Who are your heroes (musical or other)?

As someone who came to improv from playing Jazz, many are the usual suspects. John Coltrane and Ornette Coleman come instantly to mind. But I feel really lucky to be living in the UK, with its rich heritage of improvising musicians. John Edwards, for instance, never ceases to amaze me with his musicality, and creative use of his instrument. I really admire the sheer energy and commitment he brings to every gig (or at least the many I have seen), something which I will always aspire to do as a musician.

I have visited many special schools over the last few years. In these visits I have been lucky to work with some of the most energetic, caring and kind people I have ever met. Outside of music, these people have been some of my biggest role models.

What would be your definition of “noise”?

That’s a tricky one! I’d probably need some context to give a more meaningful answer.

As a saxophonist I am interested in ‘noises’ which are outside of the expected sound-pallete of my instrument. This could be outside of my own expectations too. ‘Noisy’ sounds in music, or sounds which defy usual musical expectations often force me to hear music differently, exciting the visual imagination and heightening a sense of what’s happening in the moment. At least, that’s what happens when things go well. If I’m trying to avoid emphasising pitch over the course of an improvisation, I often also think of ‘noisiness’ as a measure of how unpitched a sound might be.

Have there been any pivotal moments in your life (meeting people, decisions, anything really) that have led to where you are/what you do today?

That’s a tough one to answer really. I still do quite a range of things, but I wouldn’t say my own work comes as the result of a handful of moments. Lots of small things have a small impact which accumulate over time. I’ve always wanted to try and find my own way to play, and to feel like I’m really improvising. It’s not something I feel I’ve managed yet but I’m very slowly getting closer. It’s hard to pin down individual moments, but my lessons with Iain Ballamy, James Allsopp and Julian Siegel, my time working with Oily Cart and duck-rabbit, and attending Eddie Prévost’s workshops have all been really significant in making me think differently about what I do.

I know you are a keen inventor and adapter of instruments… Last time we saw each you were playing a curtain pole! How’s all that going?!

I don’t really know yet. I had gotten into a bit of a rut with my saxophone playing (again!), and decided to make things that would fit my mouthpiece but force me to play differently. The curtain pole was just the first of many monstrosities. I have since made some more out of various plumbing materials from the local DIY shop, in various shapes and sizes. I’m trying to see if I can intuitively learn a bit more about where instabilities come from with reed instruments, and perhaps bring some of that back to the saxophone. Though I have to admit it was also a nice excuse to play with the new drill I had bought.

Now… jazz hats – would you wear one?

Emm, no. I think you have to be quite a special person to pull of a jazz hat. Perhaps one day I’ll develop the visual panache of Joe Lovano, but I doubt it.

It’s been wonderful to chat Joe… thanks so much for your time! 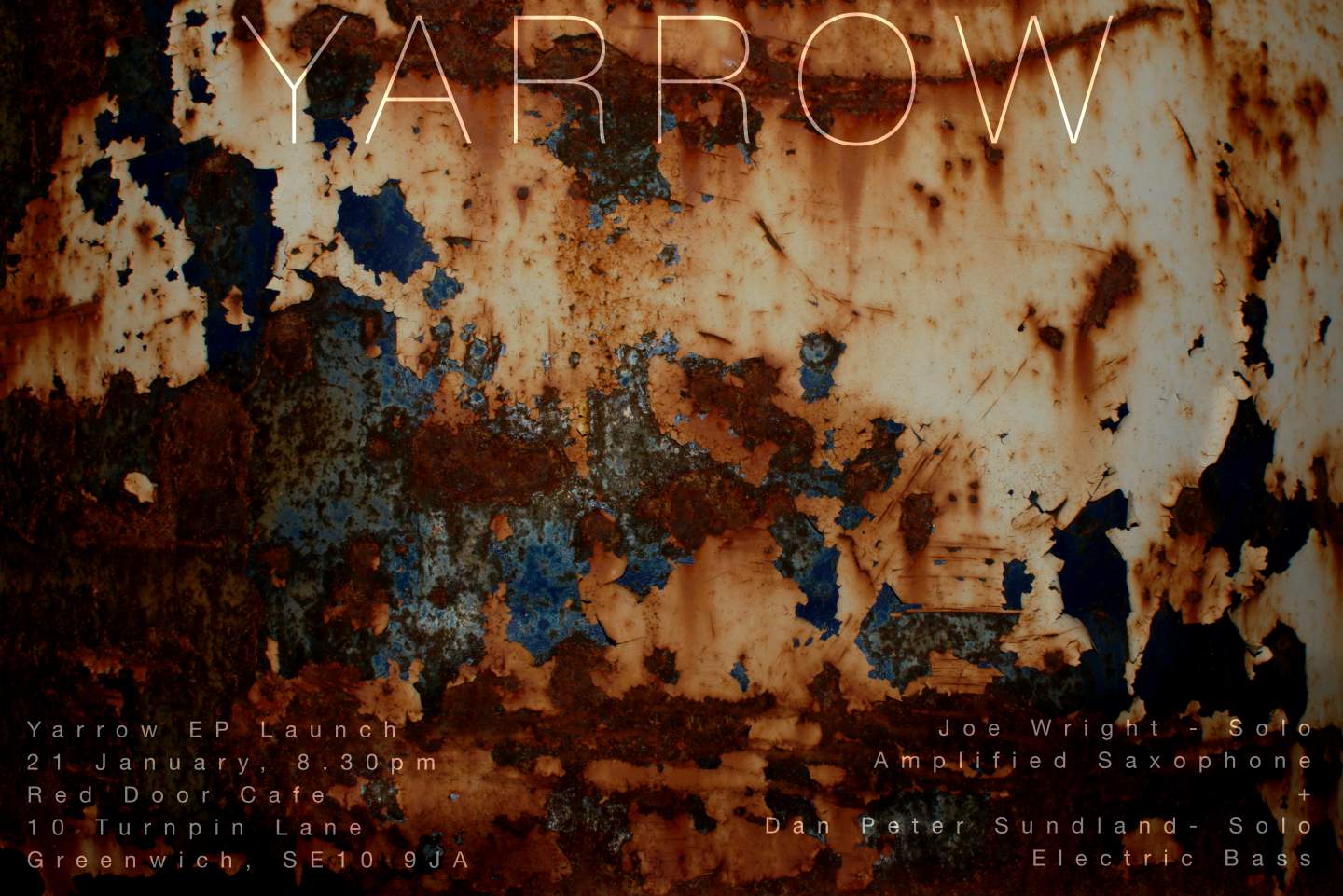 Joe has a fantastic page on his website dedicated to ‘Yarrow’ with loads of fascinating info about the music and his processes: http://www.joewrightmusic.co.uk/Yarrow.html

Here is bandcamp where you can obtain this fabulous music: https://joewrightmusic.bandcamp.com/album/yarrow

And here are a few more websites about Joe’s other projects: