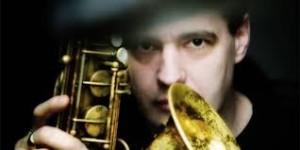 Mark Lockheart is a beautiful tenor player, always involved in highly creative projects, be they with Kenny Wheeler, Django Bates or his own fine ensembles. I have known Mark’s playing ever since I was a teenager, first getting into jazz and listening to Loose Tubes… Here I chat to him about all things musical…

I love the top notes on the tenor so would say top E, perhaps I like the upper notes because I started on alto and hear the upper range more. Coltrane’s Ballads album was a big inspiration for a tenor sax sound and on that record Coltrane plays all the tunes quite high.

… If you could add one modification to the saxophone what would it be?

I wouldn’t its perfect as it is just needs lots of work to control it!

How can we ever solve the one-useful-reed-per-box problem?

Can’t see a way but I practice on crap reeds and keep the one good one for gigs. I’m hoping they’ll discover a new type of cane on Mars one of these days… 😉

Don’t know why so many people sound the same on the saxophone, you can do anything on it, it’s such an expressive instrument.

Where to go next? Let’s talk about your new release and go back to Ellington… whose music is a big topic – how did you approach the arranging?

I started improvising around some of the melodies like Satin Doll and Mood Indigo and followed my nose trying not to think of the original harmony but go where the melody led me. I was never interested in trying to recreate, so to me the end result sounds like new music – although heavily based on Ellington’s source music. I love Ellington and the way he writes so hopefully I’ve done it in a respectful way.

I think we’d all agree you have!! The themes of Ellington drift in and out of the music like motifs, the album tracks are like chapters in a book…

I think the writing was very instinctive and when I set off I purposely didn’t want to follow any lead sheets etc. as it might stifle the ‘following my nose’ approach I was enjoying at the time. I basically followed the melodies not worrying at all about the type of harmony the original had. Interestingly enough when the arrangements started to take shape I noticed that some of the harmony was nothing to do with Ellington’s and some other things were exactly Ellington’s harmonies.

I think sometimes people get too bogged down in harmony for the sake of harmony, counterpoint is the key to interesting harmony for me.

How did you decide on the order of the tracks, did that come later? Or did you have an idea of how you wanted them to flow between each other before the recording began?

The order of a record is always really important to me possibly as I was brought up on LPs. Whenever I got into a new record I’d listen from beginning to end following the story through the chapters. It’s a shame with CDs sometimes that they are so long as it’s really hard to write an epic and I would always prefer a CD under 60 minutes with no ‘fillers’ unless its completely earth shattering. With this album I knew what I wanted to start and finish with and felt keen to start with something that would draw people in so ‘Don’t Mean A Thing’ ticked that box. For the next track I wanted to immediately take the listener somewhere else, almost to force them out of their expectations of what was coming up next so ‘My Caravan’ with its worldly almost Bedouin sound world fitted that role perfectly.

Mood changes and solo order was important too and I wanted to finish with a ballad so Indian Summer worked for that.

From your liner notes I understand this started as a Trinity College of Music student project that evolved… That’s a really great story about how modern jazz education and its contribution to the UK scene has had a really positive impact on established players as well as the students.

It was great to be able to workshop some of these ideas at Trinity and it was a really important part of the process. For me as a musician it’s really important that I develop still while teaching otherwise I wouldn’t want to do it.

So ‘Ellington In Anticipation’ started as a bit of an educational challenge as a lot of students hadn’t listened to Ellington much before and saw little relevance to their development. I rose to the challenge and started fiddling around with the melodic shapes in Satin Doll. Through a process of deconstruction and manipulation this became my own composition (as I changed it almost beyond recognition!) Jungle Lady. Satin Doll was the first victim then I tackled Creole Love Call and Mood Indigo.

Let’s go back to Loose Tubes now (I guess part of your jazz education!), how did that group start/how did you become involved with it?

Graham Collier got the band together as he had the idea of forming a big band that was an antidote to NYJO, basically a band playing good original current music rather than bland generic big band jazz. I knew Graham a bit from working in his band and Roger Dean’s ‘Lysis’. Graham also knew that I worked with Django Bates and a band called ‘Lets Eat’ with Steve Berry, John Parricelli and Dave Patman. The idea I guess was getting like minded people together for the first rehearsals so when we all turned up in Queensway one night to rehearsal we were all sort of linked through various bands and friendships.

Have you been influenced by any saxophonists outside the Jazz world?

I get influenced by all sorts of music and jazz is just one strand of my listening. All the saxophone players I like best are from the jazz world though. I studied classical alto sax at college so appreciate the technique that goes into being able to play classical sax repertoire and try and impress this on my sax students as classical articulation and flexibility is really important to all saxophone players.

Which is the most surprising piece of music you have discovered you like (i.e. something you wouldn’t normally go for!)?

This is a hard one as I’m constantly discovering things I didn’t know about. I’m often surprised how good something sounds when its basically put together in such a simple way – Kind Of Blue for example. As I get older I realise more and more that its not how much you know but how you use your tools that makes really interesting music.

I’m really interested in different textures and use of space, recently been listening to music other than jazz for example John Adams, Burial etc. Polar Bear is a big influence on my music and the way things can be put together, I love the way we play improvised music in a way that avoids the typical jazz language but is still jazz. By that I mean that you can play jazz without being hung up with playing jazz language, why not put the language together in your own way? That’s always how jazz has developed.

That’s an interesting co-incidence as I’ve been listening to a couple of pieces by John Adams recently too! A friend put me onto ‘Gnarly Buttons’ and I’ve also been checking out ‘John’s Book of Alleged Dances’…

Hoping to start working on another Perfect Houseplants record in the summer – it’s been a long while since we recorded something and its probably overdue.

And gigs-wise, what’s coming up?

I’m also working on new music for an album of duets that I’m looking forward to.

It’s been so great to talk to you Mark, I look forward to hearing all your future musical musings as always…